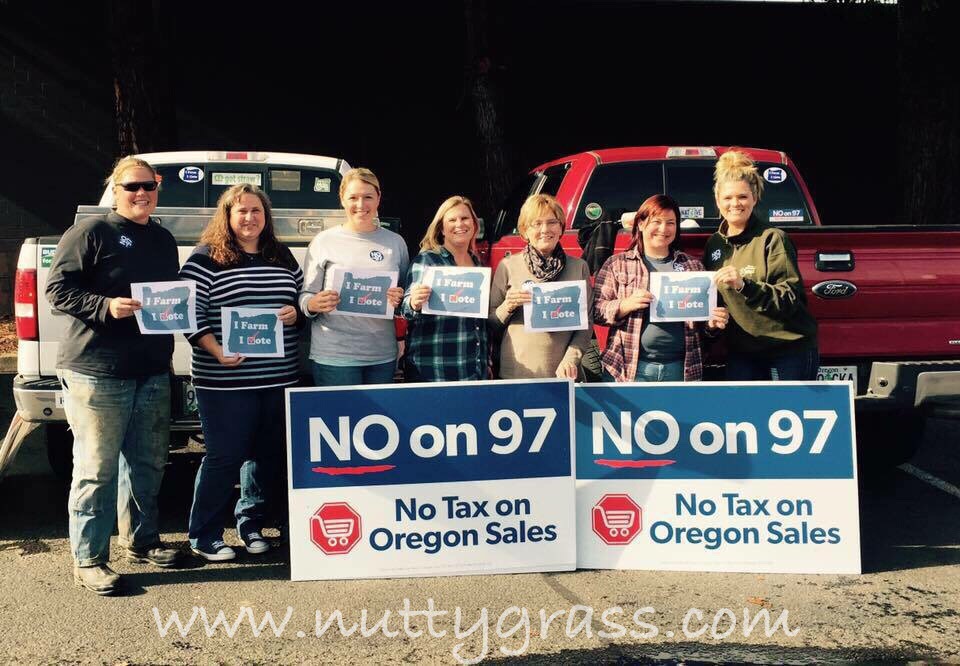 I have many people come up to me and say, “I vote with farmers.” Which is great, with all that we do for Oregon’s economy, with all that agriculture provides, it’s no wonder that people appreciate the direction that we want legislation and political races to go.  So what happens when there are conflicting farmers out there.  Unfortunately in Oregon this happens a lot more than I care to admit.  Many times it’s not as public as campaign commercials running back to back, usually it’s done more in the halls of the legislature.

But this year, Measure 97 has once again, brought farmer vs. farmer to confuse and perhaps persuade a certain direction.  I will say here that it’s no surprise to anyone my stance on Measure 97, I’m a NO vote, and I urge you be be as well.  Below is my commercial giving a very short and very small piece of the puzzle of why I believe so strongly that this is not the right sales tax for our state.

But then, you may see another ad, one with a farmer named Don Schoen.

He appears to be a hazelnut farmer by all camera angles provided.  A good friend of mine and fellow agvocate, Anna Scharf did a little researching however and we found some interesting information.  Information that even Mr. Schoen might be interested to read…here are Anna’s findings…

Farmer Don Schoen a farmer from Hillsboro who has about 3,600 hazelnut trees is quoted on the save Helvetia website as saying “My farm is smack-dab in the middle of the proposed urban reserves….. We export about 35% of our crop – the rest is bought by local companies, such as Burgerville, for their hazelnut milkshakes and Oregon Bread, for their hazelnut bread.  I need the certainty of rural reserves in order to continue to invest in a long-term crop like hazelnuts.” (Source- www.savehelvetia.org)

When Mr. Schoen is advocating for a Yes vote on Measure 97, maybe he should remember that it is NOT just “out of state big business (Monsanto and Wells Fargo)” that will pay; it is also Burgerville who will be TAXED on their gross sales. “All Burgerville locations are within an 80-mile (129-km) radius, mostly in the Portland metropolitan area, and the chain had annual revenue of around $75 million in 2010” (source – Wikipedia). Their “fair 2.5% TAX” would be ~$1.875M.  Oregon Bread (which is produced by Franz Bakery), which Mr. Schoen states also purchases his hazelnuts, is a fourth generation, family-owned baking company based in Portland, OR since 1906.  They are also considered a “Big business” that will be forced to pay their “fair 2.5% TAX” on their over $25M in annual sales. Where will Burgerville and Oregon Bread come up with the money? Consumers of course! Measure 97 the hidden sales tax on consumers!
Get the facts, get educated and VOTE NO on Measure 97

So there you go…farmer vs. farmer, but I’m hoping that you all will vote with this farmer and many others across the state and say NO to Measure 97!!